Today we will evaluate the protagonist of Sluban “Pacific Rim 2 UPRISING”: Gipsy Avenger.

Well, now you have the full picture of this Gipsy Avenger. This box of Gipsy Avenger has a total of 461 Pcs. The number of parts is not the most in the Pacific Rim series, and of course, it is not the least. It has a moderate number of parts, and the shape is barely acceptable. It is 24.3 cm tall, slightly higher than Saber Athena, and much higher than Bracer Phoenix. The size of this box of Gipsy Avenger is basically the largest of the four Pacific Rim series. His height is also normal because it is the protagonist after all. Although he is the tallest, he is not the burliest. 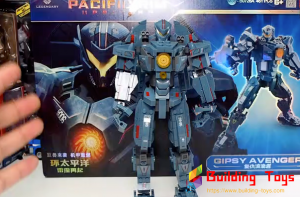 Okay, let ’s talk about his shortcomings first. This Pacific Gipsy Avenger has all the shortcomings of the two boxes of Pacific Rim blocks we made before, whether it is the problem of the bite force of the bumps or Problems with joint parts, it all exists. But the good news is that these two problems are not as serious as the other two.

Let’s first talk about the problem of the occlusal force of the bumps. The problem of the occlusal force of the bumps is actually not as serious as that of Saber Athena before. Compared with the occlusal force of the bumps, its greater problem lies in its plate. Deformation, this Gipsy Avenger, when building the body, because after the main body is built, there is a plate on the front and back to cover it. When the body is built, you will find that the boards are covered. Deformation has occurred, and it has a cover on the front and back, so after you cover it on both sides, its deformation will prevent you from combining well on both sides. Because its plate is slightly tilted upwards, there is no way to press it tightly. You just press it tightly and after a while, he will pop up again. 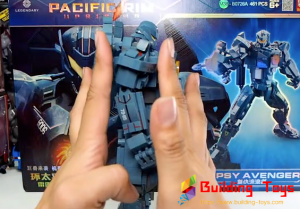 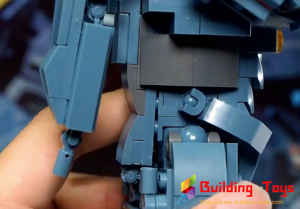 Because it is a plate, excessive pressure will cause the problem of deformation. This problem was more prominent in the Kaizhi building blocks we made before. This time it also appeared in the Pacific Rim of Sluban. The two-building block mechas did not have this problem before, but this Gipsy Avenger had a very serious problem, which was also something we did not expect because the board used was not Particularly long, even in the 2 × 4 and 2 × 6 classes, even such shortboards can have deformation problems. The quality of Sluban is slightly worrying,

In addition to this problem, it is its joints, and its joints are as loose as ever, because the mobility of this mech is very poor, and because of the influence of the joints, your arms are slightly raised. The hands and shoulders touched together, so there is no way for you to be able to flatten your arms this way. You just ca n’t lift it a little, and even if you lift it a little, his spherical pieces do n’t support the hand well. If you say your hand is flat, he will fall off by himself. Its arm on the other side is going to perform slightly better. Although there may be such problems, they are still acceptable.

There are many reasons for this. On the one hand, the surface of its spherical part is too smooth, on the other hand, his spherical part is too small to support the weight of his arm.
Compared to the arm, his feet are also problematic, and the joints of the feet are not good. We tried several times before, and wanted him to make independent one-leg movements (we tested a building block mech and his joints The quality of the pieces is good, and it is the easiest to pose the golden chicken independently.) We haven’t moved much yet. We tried this machine several times, and there was no way to find out a way to make him make a single leg independent posture.

Let’s try it again. Well, after unremitting efforts, we finally found a posture that allows him to make one leg independent, which is really very difficult. 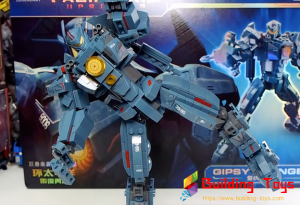 Whether the previous building blocks were Senbao’s or full-crown ones, even if they were made of giant elephants, we did one-leg independence, and it was not as hard as this mech, which means that its joints are really bad. If I want to buy it home, I have two suggestions for this joint or replace it with a Lego. Either use glue directly, 502 glue can guarantee you a perfect performance.
This building block also has some problems that can kill the perfectionist on the sticker. For example, like this sticker, the sticker side generally puts it all on, even if the side is transparent. And these two positions on his side, near the ankle, use a small sticker to stick you in the middle. Sluban is too cost-effective! We have no way to stick it in the middle. Wouldn’t it be sad to see it?

Gipsy Avenger also brought the weapon in his hand, and his weapon was the cannon on his right hand. 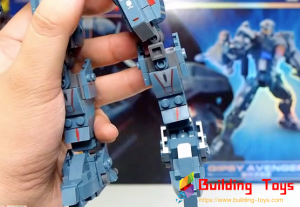 In the movie, everyone saw her posing with her hand, which is also one of its main weapons. But this weapon is a hand replacement. If you want to mount the weapon, you must take it down. Let’s load up the weapon and see the effect. We put the weapon in its hand. 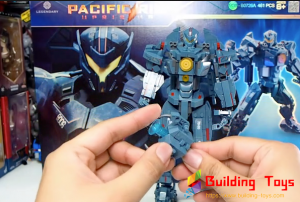 In all fairness, after the weapon is put on, the hand looks actually pretty good. If you want to pose this mech like the pose on this box, it is almost impossible to complete the task, because the performance of its joints is too poor, you can’t pose him in such a handsome manner. 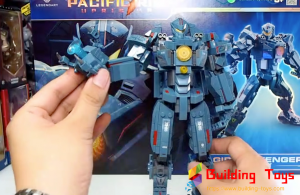 In fact, I really feel that Sluban is really bad in quality. It wastes such a good design. It should be said that good designed IPs are ultimately destroyed by the quality of Sluban ’s own building blocks, so in this box of building blocks,  In the end, I can only put such a pose, and I suggest that you do n’t have to play with this block of blocks, because when he plays, he often drops one here and one, and one accidentally falls apart. You still put it there and stand on it.

What we said before are all shortcomings, but the advantages are actually there, the advantage is that its box looks pretty good. Then the designer’s design is also good, which is also these two advantages.

Alright, we have completed the third box of the Pacific Rim Mech. This is still the last box. This is the English version of Guardian Bravo. The box for export is smooth, unlike the previous three, which are rough, and the box does not have the Sluban logo. In the English version of Guardian Bravo, is the quality of his blocks better than the other three sets? Please see our next review.