We continue to review XingBao Blocks. Today we are looking at the water tank fire truck of the Fire Fighting series, model number XB-03030. 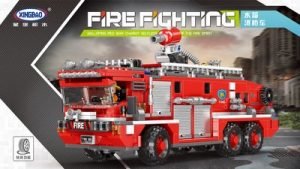 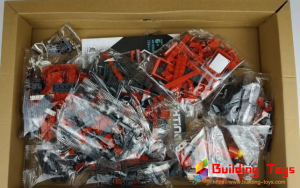 First look at the outer packaging. The dark background makes this red fire truck stand out. The tire in the lower-left corner indicates that this is a toy that can be pushed. The inner box instructions indicate that this set is subcontracted in steps.

After half a day of hard work, our XingBao water tank fire truck was completed. The finished product of this fire truck was very surprising because it was more complicated than the Lego fire truck. In addition, most of Lego’s fire trucks appeared in the Lego City Group, and only a few appeared in the Technology group. The airport fire truck in the technology group, many people feel very satisfied after playing, because it has better mobility, and this water tank fire truck made of particles, its performance can also make people very satisfied. 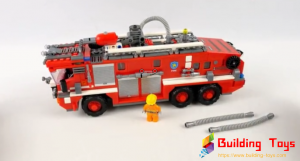 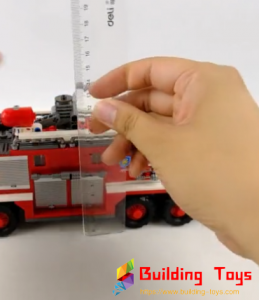 The main body of this set is this large water tank fire truck. I ca n’t wait to share with you this fire truck. Let ’s take a look at the dimensions of the fire truck and measure it with a ruler. The total length is about 28 cm, its width is about 8.8 cm, and its height is about 12 cm (because the water gun on the roof is retractable, we retract it to measure at the lowest height). This site can be played in your hand or displayed at home. It ’s just that this fire truck may not be suitable for display, not that its shape is not good, but that many people think that the fire truck made of blocks is a child ’s toy, but in fact, this fire truck looks really good.

Let ’s take a look at its mobility. It has a total of six tires. If you push it lightly, the car will move without any resistance or any parts falling down, so you can play in your hand or push it around.

We turn it over and you can see that there is a gear on the roof of the car. The gear acts as a knob. The knob can control the steering of the front wheels. Yes, you heard that right. The front wheel of this XingBao has a very simple steering mechanism. Turning the upper gear can drive its front wheel to turn left and right. Although the steering range is not very large, it is particularly fun to play. In particular, its steering has a little resistance, and it is not very loose, so if you turn it to the middle and let him go straight, basically it can meet your needs, and it does not have other imitation building blocks to turn. Very loose or crooked problem. 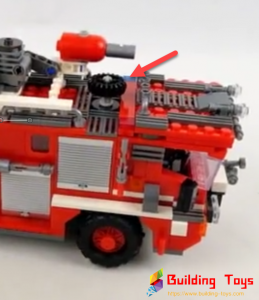 There is also a water gun on the roof, which can be lifted up and down, and then simulate the state of fire suppression. You can also rotate left and right, but there is no linkage device like gears, you can only rely on your hand to rotate. 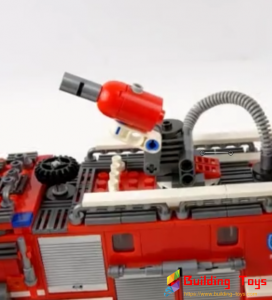 In order to further restore the details of the water gun, the designer designed a hose at the back to simulate the water pipe drawing water from the water tank for fire fighting. 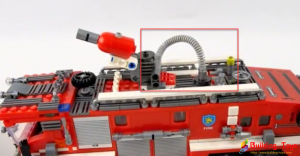 Then look at the rear of the fire truck. The rear of the fire truck is definitely a highlight because it is a water tank fire truck. Since it is a water tank fire truck, it should have an emergency water pipe interface. Its emergency water pipe interface is in the car. At the rear, there is also a gear here. As long as we rotate the gear, two water pipe connections are extended. At this time, we can take out the previous hose and connect it. After connecting it, you can go to other places to extinguish the fire. The design of this detail shows that the designer is still very attentive, and then it has the same effect when it is stowed. We turn it back so that it is all stowed. 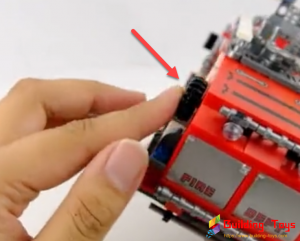 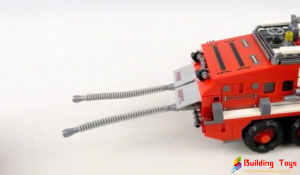 Let’s take a look at the driver’s cab of this fire truck. Its cab is an easily removable design that can easily put Minifigures in it. There are also two joysticks and a steering wheel inside, and its cab is in the middle, which makes people feel more like a child’s toy car. 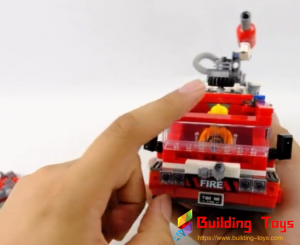 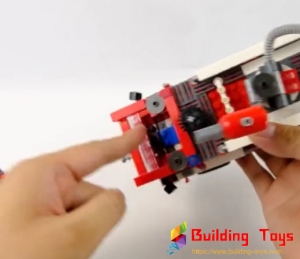 Fortunately, this fire truck is an 8-segment car, and if all the wheel arches next to it are counted, it has already reached 10-segment width, so the driver’s seat can be modified to reach Lego. City group effect.

In addition, you can see that this car has a lot of patterns on it, all of them are not stickers, all of them are printed, which I am quite satisfied with.
The side doors of the fire truck can also be opened. After opening, you can see the engine inside. Although the engine cannot be linked, how many engines can be seen after opening, it will still make people feel happy. I think it would be more appropriate if the designer could transform it and put some small things like fire extinguishers in it.

In general, as a fire station slightly ignored by Lego, although it has a lot of fire truck products, there are few such complicated fire trucks. XingBao just fills this vacancy, and its price is natural. It is also very affordable. This box of water tank fire truck is a 720-piece building block containing a Minifigures. The current price is $ 28.5. If you need it, please click the button below to buy it.