When I opened the box, the first thing I saw was a small box, which was a gift from Winner. After taking away this box of gifts, it is all the accessories of this box of Steam Train. There are 10 packs of parts and an instruction manual.

Let’s take a look at its minifigures. This set has a total of four minifigures. As a SteamAge punk-style minifigures, it also has a distinctive era style. The first figurine is obviously a decent character, with a large gun in his hand, and the painting of the figurine can also be satisfactory. The figurines’ hands are also installed, which we have already said before. The second figure is a Mohican head, and his feet are a bit like Captain Lego’s Hook. One foot is real and the other is a prosthetic leg, which looks slightly strange. However, it is also acceptable to put it in the background of the steampunk style story. The third figure is wearing a pretty white suit. Of course, the weapon in his hand is also indispensable. The last figure is obviously a train driver. He also has a long gun in his hand, which is very relevant to the whole story. So these four figures Very suitable for this scenario. I looked in the box carefully, Winner didn’t name these minifigures. 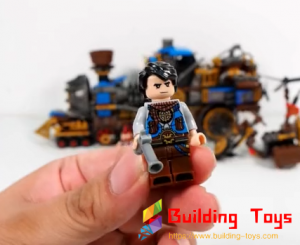 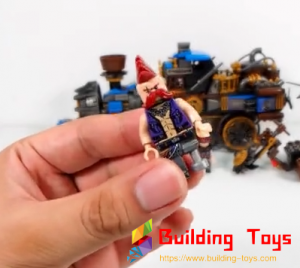 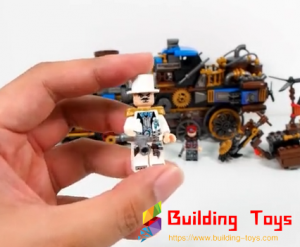 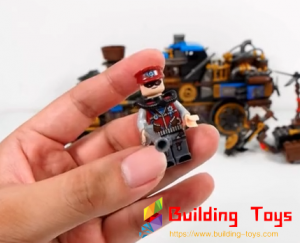 In addition to the main Steam Train, this set also brings a small pedal helicopter, this style should be seen often in the steampunk scene. We put a minifigure inside, and this effect is also very good. 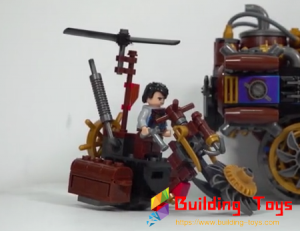 Let’s take a look at this Steam Train. The shape of this train is similar to an arrow. It is narrow at the front and wide at the back. It has a length of 31.6 cm. Its widest point reaches 12.8 cm. Its highest point is on the locomotive. The height from bottom to top is 13.8 centimeters. Its measurements are moderate, it will not be too complicated to put together, and the finished product will have a good effect.

Let’s talk about the play points of this set again. One of the biggest play points is its linkage. One of the wheels under the train is the main driving wheel. When the driving wheel is rotated, it can drive the front air intake. The turbine, which drives the chimney above, drives the engine at the back, and even the gear next to it. The reason why it can be driven is that it uses a main shaft, and the length of the main shaft is about 11 units.

There are 4 launchers on the side of the train, two on each side. They are traditional building block gun launchers. We tested its launch power, and it was very light and very suitable. PS: When firing bullets, do not launch into your eyes.

Let’s take a look at the train’s color. He is composed of three main colors: gray, black, and brown. The middle also uses gold lines for color matching. This color-matching is very consistent with the theme of “SteamAge”, including the stickers used. Let you have some retro feel, and some cracks on the train, a little rougher SteamAge.

Of course, this box of blocks is not without its shortcomings. The biggest problem is the problem of the bite force of the blocks. Some parts are too tight or too loose. But after all, it is not Lego. It is just a box of Winner. The problem of uneven occlusal force is not only seen in Winner, but also in many other building blocks.
Although it has this small disadvantage, when the finished product is in front of us, after watching a lot of city series and fire series, then look at Winner’s punk style SteamAge, will it give you some fresh feel? 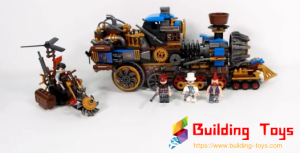 Well, today ’s review is here. This box is made up of 543 pieces of blocks and 4 figures. The unique style Steam Train (“SteamAge” series is Winner’s original design), do you like it? Its price is only $ 23, if you like, you can click “Buy Now” below to buy.