This 497-piece building block constitutes a Supply Ship with a total length of about 37 cm and a width of 4.7 cm. The total height from the top of the hull to the bottom of the ship is about 12.5 cm. The overall size is between 055 and 054A of the same series. Putting them together will not cause disproportionate problems. 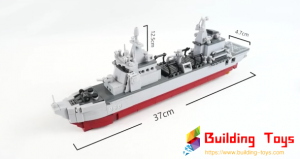 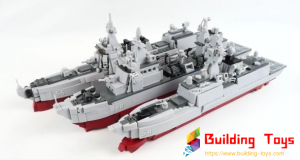 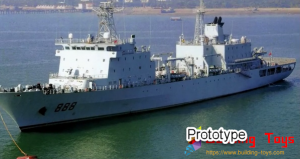 In 2012, it was once changed to the fishery administration number, becoming the world’s largest fishery administration ship. In general, it is a very low-profile warship. As of 2019, two variants of the 904A ship, Junshan Lake and Lugu Lake, have been in service one after another, and three Supply Ships have also laid a solid foundation for the lifeline of the South Island Reef in China. As for the 906B Supply Ship that Sluban wrote on the box and the corresponding performance parameters, it can only be said that this box is purely fictitious, and if it is the same, it is purely coincidental. 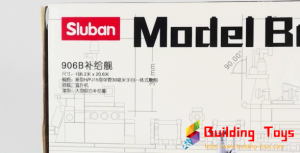 Although the proportion of the hull waterline is still not completely restored, it gives a pretty good impression. Like other products in the same series, this Supply Ship also has a detachable bottom. The waterline hull has 4 wheels hidden in it so that the ship can be pushed on the flat ground, and it is quite smooth. The 4 davits in the middle of the hull can be lowered outwards, and after being lowered, the middle hatch can be opened. There is also a small boat inside, but after all, it is only a small and medium-sized set of 500 pieces. The internal structure and details are basically so much. 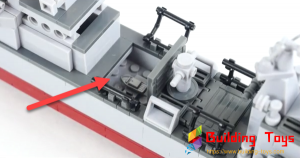 Finally, in terms of accessories, this 904A Supply Ship is still attached to a universal board of the same series and two Maza-type brackets.

All right. In general, the Sluban building block is a 904A Supply Ship, which still maintains the consistent style of the same series of products. The overall design is reasonable, the appearance reduction is quite good, and there is some playability. 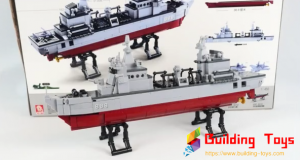 In addition, Supply Ship is a field rarely covered in military theme programs. Set itself also has a certain unique theme. For players who want to add to their building fleet, this Supply Ship will sell for $25. It is a pretty good choice. Of course, this is only a set of 1: 4 to 5 ratios. The building block kit consists of less than 500 pieces. Compared with the two big ships of 1000 pieces, it is still slightly insufficient in terms of internal purchase and playability… So, the price of 500 pieces of building blocks,less than $25, can you accept it? If possible, click “Buy Now” below to make a purchase.