The Aircraft Carrier consists of a total of 1636 building block pieces. After assembly, the total length is approximately 68 cm, and the deck width is approximately 17 cm. The height of the top is approximately 19 cm, which roughly corresponds to the 1: 450 mark. This set of aircraft carriers, in terms of overall combination and quality of parts, has significantly improved than the old Set before Sluban. However, it should be noted that this Aircraft Carrier, which consists of more than 1,600 pieces of building blocks, has a total of 22 packages and subcontracting in the set, and the printing of the subcontracting numbers is not obvious, so the preparation work before assembly begins is still quite Laborious. 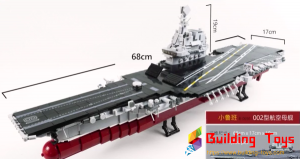 From the model and overall shape, it can be seen that the design of the Sluban aircraft carrier obviously refers to the CV-18 conventional dynamic ejection aircraft carrier of Nishikasai Shipyard, and the overall design level has also been greatly improved. However, I am a little confused about the naming of this kit. When most netizens refer to the CV-17 as a 001A aircraft carrier, the 002 aircraft carrier will indeed be linked to the impression that the catapult takes off. But by the time this set is launched in 2019, the first domestic aircraft carrier that has officially taken off has officially been named 002 Aircraft Carrier. At this time, the Aircraft Carrier that took off to this catapult was named 002, which seemed a little rigorous. Personally, it is better to change the name to 002A or 003.

Adhering to the tradition of the same series of products, Sluban has also set up a quick-release hull on this aircraft carrier. The bottom of the ship hides 4 pushing wheels, which is convenient for pushing the ship to play on flat ground. However, if you take a closer look, you will find that the proportion of the hull below the waterline is too large. When the bottom of the ship is not installed, the freeboard height is low, which has a certain impact on the perception. The huge bulbous nose on the bottom of the ship was too conspicuous. In addition, the bite force of the hemispheric parts of the bow is loose, and it is easier to drop when playing. I have to say that the oversized bow part really makes people doubt whether the designer secretly hid an ICBM launcher in the hull … Except for the oversized bulbous nose, the shape of the ship’s shape It’s pretty good.

Details such as the four close-propelled guns at the four corners of the hull and the small boat crane on the starboard side were also restored. The overall shape of the flight deck is well restored. The identification stickers on the deck are basically slender strips, with less transparent parts. Compared with the 075 amphibious assault ship with a full plate of stickers, the stickers are raised and blistering. It’s good now. However, the slender strip-shaped identification stickers also increase the difficulty of pasting, which is still a little troublesome. The flight deck in the middle and aft of the hull is a quick-release structure. After disassembly, the hangar inside the hull can be displayed for purchase in the hangar, both in detail and playability. It’s just that the cross-brick logo sticker causes the quick-release function to be cut by yourself. Fortunately, the vertical strip stickers are relatively easy to cut at the joints of the parts, and will not cause too much trouble.

The four parking spaces inside the hangar can fit a J-15 of the same proportion, but it is slightly larger for the FC-31. The two lifts on the side are clamped by the clip parts on the vertical bar, and the bite force is sufficient. Nor did the 075A Frigate technology become too tight, and it moved smoothly up and down. The shape of the ship island is completely based on the Liaoning ship and the 002 aircraft carrier engineering design in reality and the overall shape is beautiful. Due to the earlier design of the prototype, the three-coordinate radar was still retained on the top of the mainmast. 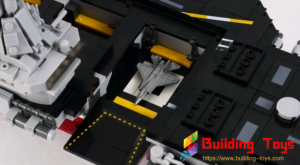 In this aircraft carrier, 4 board accessories are attached, including general-purpose boards of the J-15 and FC-31, and 8 fighters can basically fill the parking area and ejection area delimited by the deck. Unfortunately, small one-piece aircraft cannot fold the wings. It is more difficult to fill the deck with the aircraft like a real aircraft carrier.
In general, this 002 Aircraft Carrier produced by Sluban, as the largest number of parts in the same series, the largest one, the overall performance is very good. The combined feel of the entire SET maintains the consistent level of the same series of products, and the overall appearance is full of momentum and also has certain details. The design highlights of the quick-release hull, flight deck and hangar also make it the most interesting point in a series of products. It can be seen that Sluban did a lot of work in this new product line, and it really made people see their sincerity.

However, disadvantages also exist. There are two main points:

Fortunately, these two problems have been greatly improved in Sluban’s new products. For details, please see our product pictures.

In terms of price, this one consists of 1636 pieces of Aircraft Carrier. The current price is $52. If you are interested, you can click “Buy Now” below to buy.