Looking at it from the front, you know that 022 Missile Ship is a catamaran, so this set of blocks restores the effect of the catamaran. Although it looks a little weird, it only has two more rows of bottom blocks, but the effect is Good, after all, this is just a box of more than 500 pieces, a medium-sized building block set.

We turned it over and we could see its bottom, but it was all empty. There is no real double hull, just the thickened blocks on both sides of the ship, directly in the middle is the ship deck. The ship deck is made of three-color parts. Each ship deck is not large, but the connection effect is quite good.

Seen from the side, he well restored the stealth characteristics of 022.

Looking from the top, you will find that the figure of this 022 Missile Ship appears to be a little too slender. If its width can be widened by 2 ~ 4 blocks, its reduction degree should be higher. There is still some gap between this width and the real 022 Missile Ship.

His bow was armed with a 30 cm 6-barreled anti-aircraft gun. In the middle of the hull is the cockpit, which can be opened. Above the cockpit are various radars, electronics, and more.


At the stern is a launcher for the Eagle 83 missile, one left and two launchers. This launcher can be opened. After turning it over, you can see the missile hidden inside, but this missile is only half-cut. The stern looks nothing special, and there are some lids that can be opened.

This Missile Ship still has cons. The biggest disadvantage is its bow and the deck below. Because there is no support in the middle of the bow, during the assembly process, when these building block keys are pressed, it is relatively loose. If you can add a layer below, it can look less soft in the middle, and the effect will be better.

The 022 Missile Ship of the GUDI building block has two problems, so we choose another RC Missile Ship for you, you can check them on Amazon. 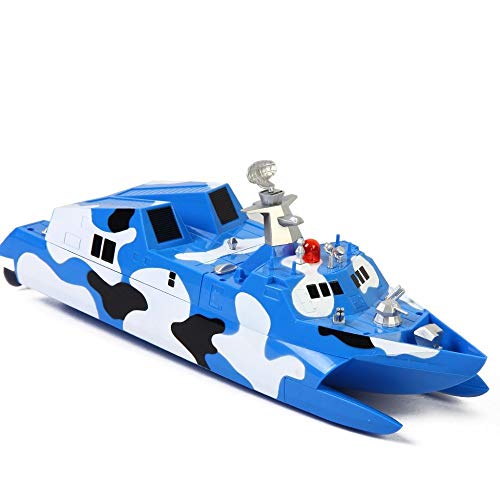