Today we are reviewing the Porsche 919 produced by the DoubleE (CaDA) building block. This 919 has a total of 1586 parts. Since there is no genuine Porsche license, you can see that it does not have the Porsche logo on the entire casing.

We turned it over, and you can see that the back of the box is still those functional instructions, and it still looks very rich. And it also has the function of power conversion. Yes, our box does not actually have a motor, so its price is effectively controlled within $60. 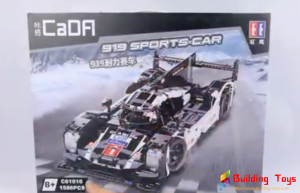 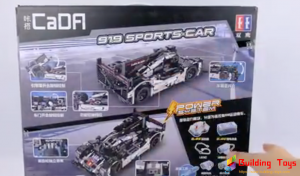 How does it perform? Let’s take a look together. We measured the size of this DoubleE Porsche 919 Hybrid Sports-car. It has a length of 49 cm and a width of 22 cm. Its height is 13 cm. This size is actually big in your hand. It’s quite heavy. What about its promotional functions?

Let’s try it together. Let’s look at it first. You can see that there is a function lever on this side. You can control the opening or closing of the door or the engine compartment at the rear by swinging the lever forward or backward.

Let’s try the door in front of it, and flip it back to open the door.

did you see? It’s very easy to open the door. After opening the door, you can see that the interior of his car also has a certain interior, there is a steering wheel inside, and the steering wheel can be linked with the tire. You can also turn the tire when you turn the steering wheel, but this cockpit is too small, and it is not easy to put your fingers in.

So we still control the tires by hand and watch its steering wheel rotate. This makes it easier and more fun. And like the real 919, it has only one seat in the middle. After all, it is a racing car. Instead of a sports car on the road. So as long as there is a driver and a place to sit.

In the same way, we can turn the knob in the opposite direction to easily retract the door. The door is retracted and opened, making you feel that its resistance is very small, which also shows that the DoubleE (CaDA) building blocks are on the technology Series. Quality control ability is already very good. When you move the lever to the other side, the opening of the engine compartment behind the control has been closed, but when you move the lever forward, sometimes it will not be in place. You must push forward harder. It will be in place.

Compared with opening the cockpit door in the front, starting the engine at the back, the knob will make you learn the rotation is very amazing. This may also be caused by too many parts on the engine compartment cover and heavyweight.  After opening it, the internal structure and some details in it will surprise you.

Opening the engine compartment cover, the most noticeable is a 4-cylinder engine. The area of ​​the 4-cylinder engine in the entire engine compartment is really small. Although it is small, when you push this car, you can see that its piston can still run smoothly. The smoothness of his piston is much better than when we are playing those Lego-branded Bugatti. At the same time, you can see that there is a simple differential behind it. This is also the current Lego-style building block technology series. The standard configuration. Rotate in the same direction, and a knob of it can retract the engine compartment cover. Compared with its opening, it feels a lot easier when you retract it. 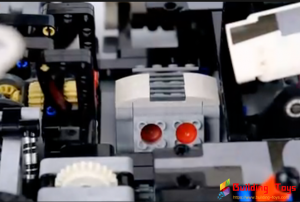 The jerky feeling when you open it is more because the engine compartment cover is too heavy, which gives you the heavy performance. If you really feel too jerky when you open it, I also suggest that you can use the gear Add some pencil lead and so on. By using these lubricating things to lubricate those gears, the effect of this car will be even better.
All the hatches of the vehicle can also be opened, but after opening, there is nothing in it now. All of these spaces are reserved for you to use after the remoting remote control kit. Not only does our set not have a remote control kit, but its lighting kit is also not included, so its price can be controlled so low.

Let’s turn the vehicle and look at its chassis. You will see that he has reserved a lot of space in the middle of the car and before and after the car. All of these spaces are used as a space for remote control transformation. At the beginning of the design, these spaces have been reserved. If you buy those pf sets, you can easily install them. This set of 919 also uses the independent suspension of the front and rear wheels. The wheels have a spring key to simulate all-wheel suspension, and its rear wheel, each tire with two suspensions, do you see? 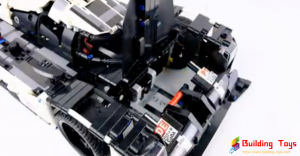 There is one on the front and one on the back, and it has two suspensions for each wheel, which makes its overall suspension performance very good. After we lowered the entire vehicle, the performance was still good. 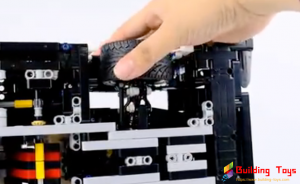 On the other side, I want to show you that this performance is quite good among the technology building blocks in China. As early as 2018, an MOC video of a Porsche 919 was released. That car is the same as this one. The Double Eagle’s 919 is very similar. I believe that the Double Eagle has also made many improvements based on that car, and then created this 919 endurance car that belongs to Double Eagle itself, and the most critical This is the 919 of the Double Eagle, and its price is indeed very affordable.

With more than 1,580 building blocks, as long as it is less than $60, and the power remote control is less than $90, I think it is a very cost-effective thing. What’s more, the quality of the parts of the Double-E building block technology series is also very good, and the feel you put together will make you quite satisfied. The most important thing is that the quality of the parts of the Double-E Technology Series is much better than that of Lepin. Okay, here is today when I switched to the high warehouse. This 919 endurance car produced by double blocks is a favorite.you can buy here.